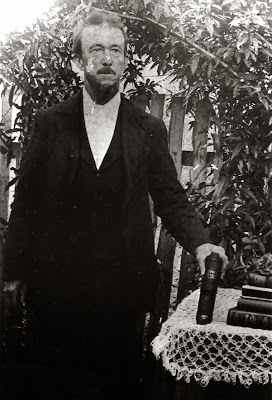 "He farmed in his native State (Tennessee) until the breaking out of the war, then joined Company B, of the First Tennessee Cavalry, under Capt. Snow and Col. Carter, being afterward, for three years, an advance guard or scout for Gen. Morgan and others. During the battle of Stone River he assisted in setting fire to the Federal wagon train at Lavern, Tenn., and afterward took part in the engagements at Bean Station, Cumberland Gap, siege of Knoxville, and other places. He was never wounded or taken prisoner, but had several horses shot from under him." 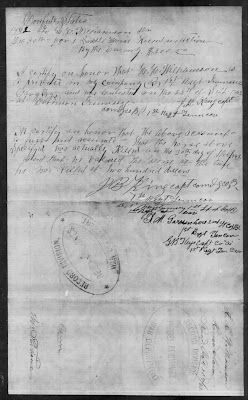 The image to the right is a record that a horse that he was riding was killed. The document certifies that the horse was killed on Dec. 30, 1862 and valued the horse at $200. In Henry Williamson's personal account, it states that "several horses were shot from under him".

Right click and save to view the full size image

Below is a description of where he was and his involvement on the day his horse was killed. Exactly where it was killed is unknown.

On the 30th, the 1st Tennessee, under Gen. Wheeler were participating in the raid around Rosecrans' Army during the battle of Stone River. At 10am, they reached Jefferson (modern day Smyrna), and soon after met a brigade train, with all the equipage of one brigade. They attacked vigorously, drove off the guards, and destroyed the train, baggage, equipage, etc, also capturing about 50 prisoners. They then proceeded toward La Vergne, and captured a party of Federals out stealing and gathering stock, and soon after overtook and captured a small foraging train. About noon they arrived in the vicinity of La Vergne and found it filled with soldiers and large trains parked in the fields surrounding the place. They immediately charged in three columns, completely surprising the guards, who made but slight resistance. They immediately paroled the prisoners, amounting to about 700, and destroyed immense trains and stores, amounting to many hundred thousands of dollars. They then proceeded to Rock Spring, attacked, captured, and destroyed another large train. They then marched on Nolensville without opposition, capturing large trains, stores, and arms, and about 300 prisoners. Then moved southwestward, they camped for the night near the Arrington community.

To the left, is a record of his Regimental Return during the month of Dec, 1864. It gives the purpose for his absence as being that he was acting as a courier for the Brigade Commander. The 1st Tennessee were assigned to Vaughn's Cavalry Brigade during December of 1864. Gen. John C. Vaughn was the Commander in charge of the Department of Southwestern Virginia and Eastern Tennessee. During December, the 1st Tennessee were in the area between Marion, Virginia and Greenville, Tennessee.


Below is the record stating that he had surrendered and that he had given the Oath of Allegiance to the United States on April 17th, 1865 in Chattanooga.

In April, 1865, there were less than 200 men left in the 1st Tennessee Regiment and were still in Vaughn’s Brigade with Gen. Echols commanding. They were at Christiansburg, Virginia on April 11, 1865 when they heard of General Lee’s surrender. As soon as General Echols heard of Lee's surrender he disbanded his command, giving his men permission to return home. After Echols had disbanded his command Gen. Duke, Cosby, and Vaughn called for volunteers to follow them. They got about 400 each. They decided to make their way to Gen. E. Kirby Smith in the Trans-Mississippi Department. Accordingly, they abandoned their wagons and everything except what they could carry on there horses, and started out across the mountains into North Carolina. The boys that had no horses scattered in every direction, mostly in the direction of home. Late in the evening General Echols, at the head of Vaughn’s brigade, Basil Duke's and Cosby's began the march toward North Carolina.
Where Henry Williamson surrendered is unknown. His record states that he "Deserted April 17/65". A portion of Vaughn's men had left Statesville, North Carolina on April 14th and headed towards Morganton. It could of happened there if he was part of these men. On the 17th, the remaining men in Vaughn's command were involved in a skirmish at Dallas North Carolina. It's possible that he could of deserted here. Hopefully, the information of where he surrendered is available somewhere.

In the Biographical and Historical Memoirs of Montgomery County, Arkansas, it says that
"Because of the bitterness of the Unionist in East Tennessee, he was one of several hundred indicated for treason at Knoxville, Tennessee and was compelled to leave Tennessee". He moved to Arkansas.
The above image is the record of his indictment. It states that he was indicted for Treason on May 26, 1865. This means that he was charged for Treason. It says that on July 1, 1865, Capias was issued. Capias is a warrant or order for the arrest of a person, typically issued by the judge or magistrate in a case. There is another entry that was made on July 1st. It is not clear to me what it says, to understand what the courts had issued. On November 14, 1866, Alias Capias was issued. Alias Capias is issued if you miss a Court appearance and the Clerk's office can verify that you were properly notified, an Alias Capias (felony case) will be issued by the court.

To the right is an image that records the fines that he paid the courts. Comparing the entries for the other men that were indicted for Treason, he paid about $6 to $8 more than the others. That is 25% to 30% more. There is nothing that would suggest why this is. $25.85 is aboutt $399 in today's dollar.  Exactly what he did during the war to cause these charges is not known and can only be speculated at this time. As stated, he was one of several hundred to have these charges placed upon him at the Knoxville Courts. Several hundred is not a large amount considering the thousands from Eastern Tennessee that fought for the Confederacy.


Credit for the images is given to "Bunny" Dever
Posted by Carl at 12:26 AM