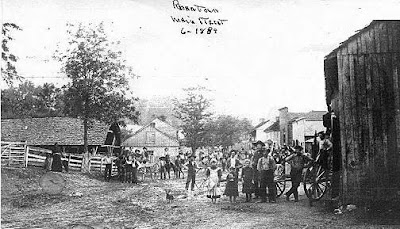 A Confederate staff officer's account of the Skirmish at Rheatown
BATTLE OF RHEATOWN - (sometimes called the "Rheatown Races")
Col. Giltner had gone into Camp-Genl Jackson had diverged from the main column & was a mile off on the R. R. -Col Carter's Brig-were sitting on their horses in the road above town.
The Enemy had made another flank movement & came upon our left, and had placed their artillery in a gap of the ridge just opposite R-town, & commenced shelling our column. Witcher who was in the rear was cut off & came around South of the town & rejoined his Command.
Our artillery was by a misunderstanding all ordered down to the Rail Road with Genl. Jackson-& accidentally escaped capture by the Enemy -, and before it could be brought up the Enemy had advanced their sharp shooters within rifle shot of our mounted men & opened upon the columns standing in the road.
A portion of Col. Carter's brigade considering rather their safety than their honor-broke to the rear & caused the terrible military phenomenon of a panic resulting in a stampede. They rushed madly forward, dashing through fences, & passed right through our Head Quarters
camp, where I was lying down to get
a little rest.
Have rode my gray horse until his back was very sore, I was bridling Capt.Jenkins Sorrell-but had only time to put the bridle on-& mounted him bareback & joined Col Carter & some of his officers in trying to rally his men—& after appealing to their sense of patriotism & pride, & their baser sense of fear of being shot for stampeding, about 300 were stopped, dismounted & sent back to a position to hold the Enemy in check until our other troops could get in position & our wagons move[d] out of the way.
I gave my grey horse (Charley) to 'boy' Arthur to lead, but the stampeders so frightened him that he jerked away & rushed headlong with the crowd.
Col Giltner's men were soon put in position on the left, & Jimmie Schoolfield's Battery of four little William Guns served by 25 as gallant boys as ever lived;- but Col Carter's men being compelled to give way on the right compelled the withdrawal of our line to another position more defensible where we could check the advance of the Enemy until our trains could move out of the way. A heavy force of the Enemys cavalry upon our left flank also rendered a change of position necessary.
Great numbers of the men straggled to the rear, afflicted with all the "ills that flesh is heir to"-and a great deal more than its honest inheritance. We could muster about 1600 men, one fourth of whom or 400 were horseholders, leaving 1200 for action, not more than 800 or 1000 of whom could at any time be brought into battle. We had assurances that we were fighting from 3000 to 5000 mounted men.

From our position near Rheatown, we withdrew about 11/2 or 2 miles to a commanding eminence called Pugh's Hill-where we fought another engagement we will call by that name.
Posted by Carl at 9:32 PM