MARCH 28, 1863
While foraging for cattle, Pegram’s Cavalry encountered and skirmished with Yankees on March 28th at Hickman’s Bridge. Then, narrowly evading the closely following 44th and 45th Regiments Ohio Infantry, they continued to rustle cattle until they had rounded up about 750 head. Bragg was relying on beef to keep the Army of Tennessee supplied with nourishing food. Pegram’s Cavalry had herded 537 of the cattle across the Cumberland River when their luck ran out. 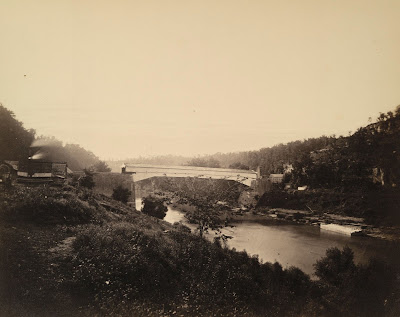 The Hickman Covered Bridge, constructed in 1838, was the longest cantilever wooden bridge in the U.S. It was also the only bridge across the steep-banked Kentucky River in central Kentucky during the Civil War. The bridge was torn down in the 1930's after the steel truss bridge was completed. Only the stone abutments remain today. It was designed by Lewis Wernwag and is also known locally as the Wernwag Bridge.
Posted by Carl at 8:45 PM