Colonel John S. Scott reports his engagement on Crab Orchards Road, during the Expedition into Kentucky 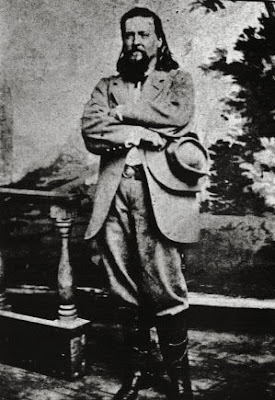 SIR: In accordance with orders, on March 30, while you were engaged with the enemy on the Crab Orchard road, I moved from your left with my own and Colonel (James E.) Carter’s regiment, to attack the enemy in flank and rear. After advancing about 1,000 yards, and reaching the head of a ravine that opened on the Crab Orchard road immediately in rear of the enemy’s batteries, I came in contact with a regiment moving in column, dismounted, bearing guns with fixed bayonets. I ordered my men to front into line for a charge, but soon discovered that I had but 30 men with me. On inquiry as to what had become of my command, I was informed by Captain (G.A.) Scott, who had pushed up from the rear, that it had been cut off by Lieutenant (J.F.) Ransom, one of your aides, ordered to countermarch, and resume the position which I had left. The enemy, whom I met at the head of the ravine, fled without firing a gun, and with my 30 men I marched back in the direction of where my command had been ordered by your aide. Before reaching them, however, I learned that you had ordered them back to me, and renewed the order to charge the enemy’s rear. After my command had returned, I found that my movements were discovered by the enemy, and he had made such preparation as rendered it impossible to attack him as near his front as first intended. After moving a few hundred yards farther to the rear, I divided my command into three parts, placing six companies of the First Louisiana Cavalry under Lieutenant-Colonel (James O.) Nixon, and four under Captain (Samuel) Matthews, with orders to charge down at right angles to the Crab Orchard road, while Colonel Carter, by making a detour to the left, would strike the same road several hundred yards farther to the rear, and charge up it. Owing to the unevenness of the ground, the two detachments of the First Louisiana were unable to reach the road, mounted, and finding the enemy in force on their front, a part of the regiment was dismounted, which engaged him briskly, while Colonel Carter gallantry drove through a regiment of infantry and dispersed a detachment of cavalry. But finding the enemy in front of Colonel Nixon too strong, he filed to the right and formed in rear of the First Louisiana, who at that time were engaging the enemy with spirit and determination. Lieutenant-Colonel Nixon fought them until his ammunition was exhausted, when he retired to the rear of Colonel Carter, who gave them a heavy volley as the cavalry charged; but, being overpowered by numbers, was compelled to give way. On the Stanford road I again rallied my men, and with a few rounds of ammunition checked and drove back the enemy with some loss, and retired toward the Cumberland.
After the charge of Colonel Carter, a fight could have been avoided, and the two regiments been brought off without the loss of 10 men; but both officers and men seemed to feel that upon an effort made there devolved the safety of the brigade, and all were willing to submit to any sacrifice to insure its safe crossing at the river. It was for this reason that I attempted to make a stand against a force fully five times my number, and that had already flanked me on both wings.
My command did not number over 330 men. Of that number the First Louisiana lost 71 men and 4 commissioned officers, and Colonel Carter’s lost 5 commissioned officers and 32 men.
The individual acts of gallantry and heroism were so numerous as to preclude the possibility of my detailing them. Colonel Carter and Lieutenant-Colonel Nixon displayed great coolness on the field. The former was at one time completely surrounded, and made his escape by use of his pistol. The latter had his bridle-reins seized by a Yankee officer, but succeeded in making his escape with a slight wound in his hand.

This is the first time that the First Louisiana Cavalry has ever turned their backs on an enemy, and I assure you I feel as much mortified as any soldier could who thinks he has done his duty. But for the unfortunate circumstance of cutting my command in two when I thought I had an advantage of the enemy, the disasters of the day might have been very much lessened, and I would respectfully suggest that aides in the future be instructed to bear your messages to me in person, instead of halting my column in a charge and in the face of a powerful enemy.
Very respectfully,
J.S. SCOTT,
Colonel First Louisiana Cavalry.
Brigadier-General PEGRAM,
Commanding Cavalry.
Posted by Carl at 1:18 AM